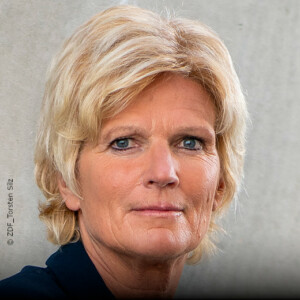 Editor at ZDF's current sports studio,
first woman to commentate live on the Women's Soccer World Cup in 2011, live reporter at the European Soccer Championships in 2016.

Claudia Neumann, born in 1964, grew up in a sleepy town in the Rhineland – at a time when Germany was still divided and women who wanted to work needed their husbands’ permission, and girls needed their parents’ permission to play soccer. She studied German, education and sports in Bonn and began her television career in 1991 as a trainee at RTL. In 1999, she joined ZDF, where in 2011 she became the first woman to commentate live on the Women’s Soccer World Cup matches. In 2016, she was a live reporter at the European Football Championship in France, and in 2018 at the World Cup in Russia. Claudia Neumann herself is passionate about playing tennis and soccer (even as a girl) – and loves cooking for sports fans in her kitchen.